It’s the month of September, and the usual F1 night race has come and gone as usual. This year it was different… because we got to attend one of the practice sessions this year!

We are grateful to our friend who was kind enough to provide us with complimentary tickets to watch the practice sessions. Although we are not the biggest fans of F1, we were keen to see how the racetrack experience would be, and also to test our night photography skills and experience how loud the engine noises would be! (Spoiler: it was very loud)

Our inaugural F1 experience was quite interesting. For one, it was one of the few events where you could see so many tourists and foreigners gathering in one location (apart from the usual places of interests). The event was also very well-organised, with many helpful signs and personnel to guide us along. We eventually reached our seats at the Marina Bay Floating Platform while the practice session was ongoing. Sadly, it faced a relatively short stretch of the racetrack, so there was admittedly not much action. The F1 race cars zipped by relatively quickly, which meant we had to capture them with fast shutter speeds or we would end up with blurry shots.

We also had a modified Polaroid camera with a modified Instax wide back to shoot at night. However, it turned out to be a super difficult task, primarily because we did not have a tripod. Despite this, we had a blast composing and shooting instant film!

As the Floating Platform faced the Marina Bay area, we had the full view of the Marina Bay Sands looming tall in the background. We were not deprived of light either, with the tracklights illuminating just about anything in its vicinity. 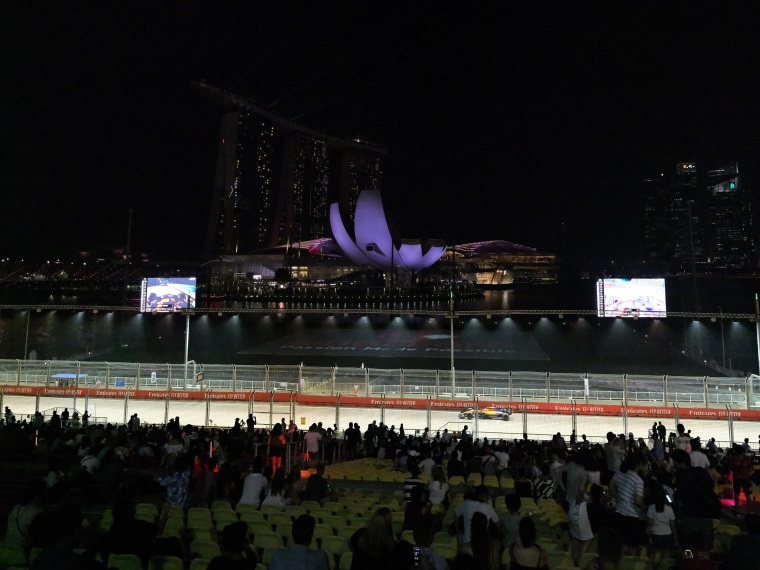 Thankfully, the F1 event wasn’t only about the race; it features a lot of musical acts and performances too! In fact, after the last practice session that night, Swedish House Mafia came on at the Padang stage, to the enthusiasm of thousand of fans. We stayed around for a bit, and watched the crowd go wild with the electrifying EDM music performance!

Our inaugural F1 experience was quite interesting, although it would not be something that we can easily afford (given the price of the tickets)! Nevertheless, we did get some creative photos from the experience, and we certainly learnt a trick or two shooting ultra-fast subjects.