So if you’re here and you haven’t seen the first part of our itinerary in Northern Cyprus, head over here to start from the beginning! This second part covers the second day of our driving itinerary around Northern Cyprus. Do carry on if you have already read PART I!

The next morning, our hosts prepared a typical Mediterranean breakfast, in the backyard, with the ocean just a short glance away. It certainly marked a great start to what would be a long day driving around the rest of Northern Cyprus.

While driving to the next stop, we came across an unmarked exit leading down to one of the beaches. We decided to take the leap (of faith) and drove down the rocky road, which thankfully our rental car was able to navigate. We realised that the beach was also being looked after by some nature conservationists, in particular turtles! We spoke to the volunteers who mentioned that we could see the turtle nests demarcated with sticks in the sand, but unfortunately the turtle eggs had not hatched yet. Nevertheless, we trod down to the beach and took a look for ourselves.

Eventually, we reached the third stop, being the Ruins of Ayios Philon, a 12th century monastery which has been well preserved and situated beside the ocean and a tourist accommodation. While there is not much to do here, you can take the opportunity to dip in the Mediterranean waters nearby!

From the previous stop, we decided to take the long drive to the northeastern-most point of the island, making the stop at the Apostolos Andreas Monastery.

We had been advised by our local friend to bring some carrots to feed donkeys, which would be grazing and hanging about the roadsides. We certainly did not miss any donkey, as we found many of time waiting patiently along the roads. Some of the donkeys were even more bold and simply waited on the road! But don’t worry, we drove past carefully, encouraging the donkeys to move away when they realise we did not have any more food.

From the Apostolos Andreas Monastery, it is possible to drive further north, although do be aware that the road quickly disappears and is replaced by rocky paths. After a very rocky and sandy drive, we reached Cape Apostolos Andreas (marked as Zafer Burnu on Google Maps). We were greeted with the most breathtaking view of the endless ocean and witnessed nature untouched by humans. 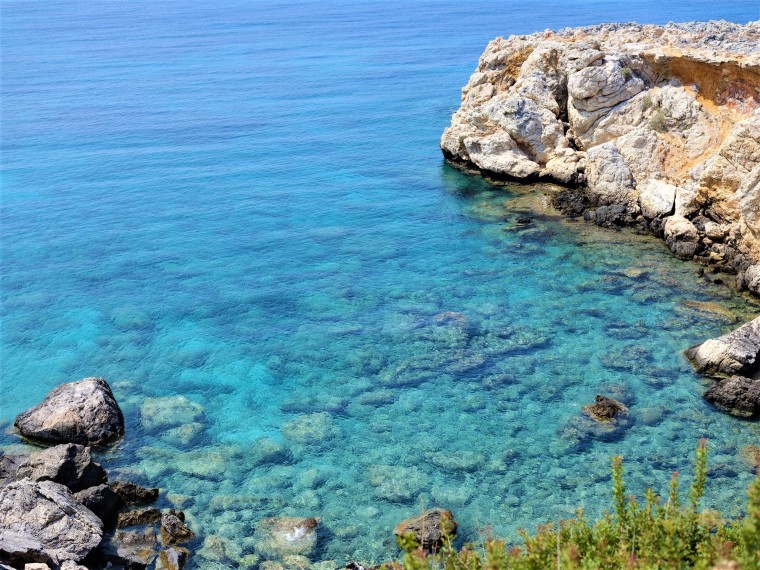 We spent a long time here, knowing that this spot would be forever etched in our memories. It also marked the end of our journey (so to speak) travelling across Northern Cyprus, as we would be driving back towards the borders. Nevertheless, this is a place that you simply have to visit!

This stop was the perfect point to stop for lunch, as there was a nearby cafe within the hotel premises, which served seafood as well! Although it is a bit touristy (in terms of price and atmosphere), you can also stop here for a bit of sunbathing by the shore and wading in the ocean.

After clearly having seen quite a bit of the ocean, we took an in-land route suggested by our friends, onwards to Kaleburnu, another quaint village located on the mountain range. Once again, we were exposed to the most beautiful landscape views, with the mountain range and vast lands before us as we drove through Northern Cyprus.

When we drove into Kaleburnu, we noted that it was pretty quiet and not many people were around. Due to time constraints, we decided to drive off after a short gander through the town, but before we left, we spotted this majestic horse grazing on a field. With hearts in our mouth, we approached as close as we would dare to the horse, to capture the neighing creature.

The journey to Famagusta was quite a long distance away, compared to the other legs of the trip. We made sure we had coffee and sugary treats to keep us awake throughout this journey!

The last city that we were going to visit was the historical city of Famagusta, where the ghost town of Varosha was also located. To provide some historical context, Varosha was a popular tourist spot in Cyprus before the invasion by Turkish forces in 1974. Many Cypriots had to abandon their homes here, and the Turkish military has occupied the land ever since. Derelict walls border Varosha from the rest of the city, but you can clearly see the tall abandoned hotels and buildings on the coastline. It was quite an odd sight to see tourists enjoy their day on the beach, languishing on sun-chairs and lounges while being surrounded by military fences and the odd military personnel on watch.

We would just like to mention that the stop point in our Google Maps cannot lead you directly into Varosha, because obviously no one is allowed in! Do not fret; once you have reached Famagusta, you can look for Palm Beach on Google Maps, which is located beside the abandoned Varosha. 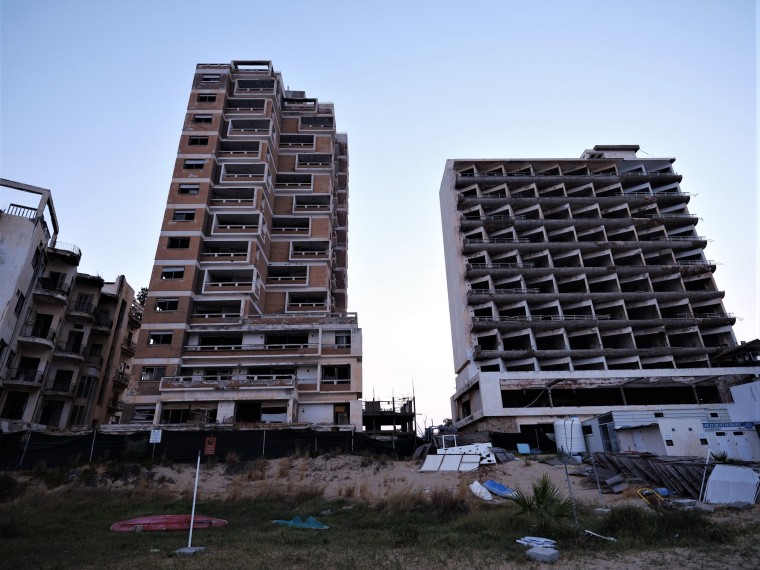 We actually tried to take photos further down the beach, but we saw a soldier/sentry started to move and who seemed to have spotted us. Even though we were standing over almost two hundred metres away, we decided not to take any further risks and move away. Ironically, tourists holding mobile phones and posing in front of the buildings were not subject to the same scrutiny (possibly because we were holding a professional-looking camera).

Eventually, with fretful but fulfilled hearts and minds, we headed back to the border crossing at Deryneia through a long road that passes by Varosha. Once again, the stark reminder of an entire abandoned and the occupied city was plain for us to see as we drove past the fences. Before we left, we topped up more petrol as we would be driving back in Cyprus too!

In our short two-day-one-night road trip in Northern Cyprus, we had learnt so much about Cyprus and the fact that we were in a territory which only Turkey recognises as being sovereign allowed us to understand the current conflict between both nations. While we do pray and hope for some reconciliation in the future, that appears to be unlikely for now. We know for sure that if we had the opportunity, we would definitely wish to return to visit this region again.

Separately, we simply enjoyed our road trip to the fullest. In a country where you can see the endless waters and the tall mountain ranges, Northern Cyprus is a must-visit destination when you come to Cyprus! The fact that most of its nature is undisturbed is certainly a strong pull factor in favour of visiting this beautiful country.

Finally, we would like to thank our helpful Cypriot friends for their tips and suggestions to travel around Northern Cyprus!

We hope you have enjoyed this travel itinerary in Northern Cyprus; we also did quite a bit of driving in Cyprus itself and had the chance to go around the south and west regions of the Cypriot Island too. Let us know if you have followed our itinerary, and/or if you wish to hear about our driving and photography adventures in the rest of Cyprus!

One thought on “An Epic Journey around Northern Cyprus (Part II)!”