Today on the 14th day of August in the year 1945, marks an important date of the end of the Japanese Occupation in Singapore. This week we have been exploring a little-known museum in the far-flung corner of Singapore, but which houses significant memories and tales of a time that many Singaporeans have not lived through: the Japanese occupation during World War II (WWII).

The Changi Chapel & Museum is a museum that depicts the historic knowledge about WWII in Singapore, the Japanese occupation, tales of livelihood and death, and the prisoners-of-wars’ (POWs) internment in Changi Gaol (malay for ‘prison’). In the museum rests a replica chapel, a symbolic structure representing all the wartime chapels built during WWII by the POWs.

The museum is intended to be an educative institution about Singapore’s experience during WWII (which was trying with pain, suffering and death), with personal accounts of compassion, togetherness and the will to survive demonstrated by the Singapore residents.

A significant aspect of the Changi Chapel are its murals, painted by Stanley Warren, an army veteran who was a devout Christian and a POW in Singapore during WWII. The murals were rediscovered in 1958, and an international search for its artist was launched. Stanley Warren was invited to restore the murals, and completed most of them before his death in 1992.

This entry will be shorter than usual, because photography is strictly prohibited in the museum. We encourage everyone to visit the museum; entry is free! Instead, we took the time after the museum visit to take some photos. Enjoy them below! 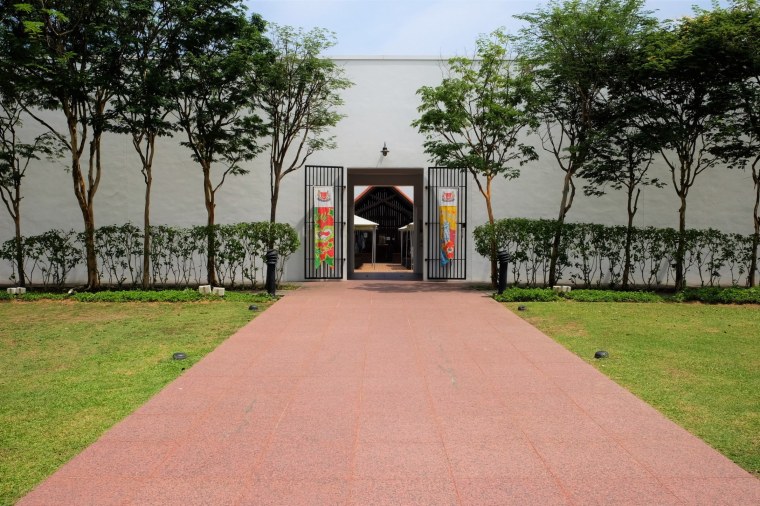 The pathway leading to the museum; the banners were placed in recognition of National Day (take a look at our previous entry on Singapore’s 51st birthday!)

As history tells us, the Japanese surrendered on this very day 71 years ago (14 August 1945), but Singapore was not liberated until 2 September of that year. The effect of the Japanese occupation cast a new light on the residents in Singapore, and a strong movement for self-government proceeded the event. On 9th August 1965, after a string of events (including the Malaya merger and separation from Malaysia), Singapore was declared independent. As they say, the rest is history.

As a bonus (because this entry is really quite short!), we have included a few snapshots:

Thanks for viewing our entry this week! We appreciate all comments and support from our readers!