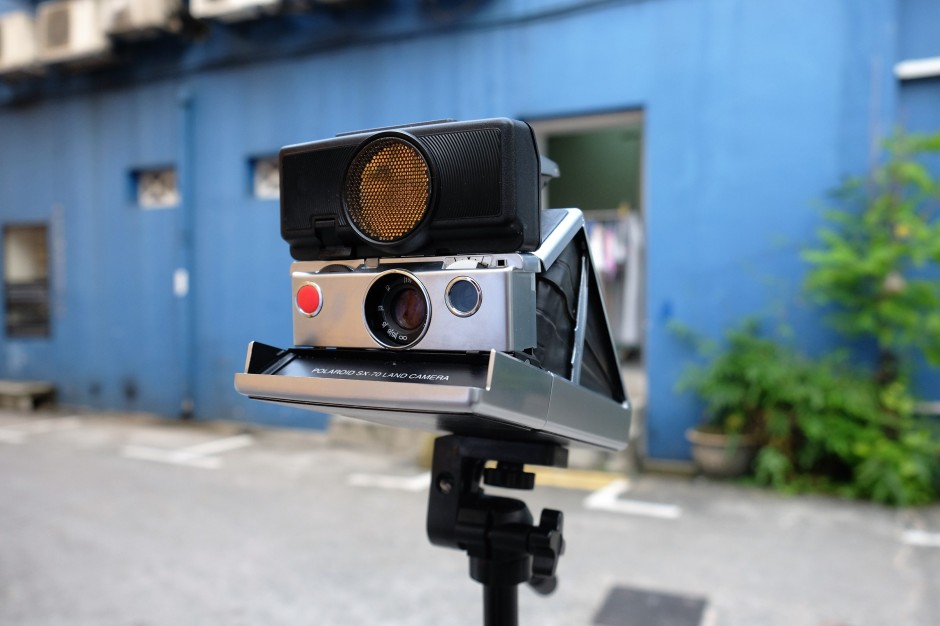 Differing from our usual entries, we have decided to try our hand at writing a review of our new favourite (addition) to our cameras- the Polaroid SX-70 Land Camera: Sonar Onestep! For the sake of consistency, we will refer to this camera as the “Sonar SX-70“! 🙂

What made us invest on another instant camera was our love for instant photography! We have been researching and looking for a Polaroid instant camera that runs without batteries! As such, we actually invested in a Polaroid Land Camera 180. However, due to unforeseen circumstances (which we will mention next time), we are unable to detail our experience with that camera.

After further research and reading up on books about Polaroid instant cameras, we decided to look for Polaroid’s famous SLR (Single Lens Reflex) camera: the Sonar SX-70! Thankfully, we found a seller who sold his camera to us for an extremely affordable price. The Sonar SX-70 came with the original box and manual and the owner maintained it very well.

What convinced us to get the Sonar SX-70 are mainly based on many YouTube videos and articles written by professional camera bloggers like Dan Finnen, Snap It See It; just to name a few. Click on their entries for a clearly more professional take on the camera specs and their recommendations!

The Sonar SX-70 is a film camera developed in the 1970s, based on the original SX-70 Model. To our knowledge, no company have continued to manufacture the SX-70 series in fresh batches. However, there are websites that sell the original and modified versions! You can even customise and change your own leather skins (purchasable off the Internet) for your SX-70-type cameras. Some modified versions (like MiNT’s SLR670 Series) gives you the flexibility of adjusting your own exposures!

“The Polaroid SX-70 Original Model was the first instant SLR (single-lens reflex) folding camera from Polaroid, in production from 1972 until the early Eighties. At its launch, Polaroid founder Edwin Land snapped an unheard-of five photos in ten seconds, and its still considered to be one of Polaroid‘s finest achievements, beloved by camera enthusiasts and collectors alike.

Artists like Andy Warhol, Ansel Adams and Robert Mapplethorpe instantly spotted its appeal. It was the first camera to use integral film (which is widely available today), and because it folds shut it was easy to carry around, always on hand for a spontaneous photo shoot. It’s a camera that loves the light – things can get a little blurry if shooting indoors, so shoot by a window with the light streaming in. A tripod also helps, or placing the camera on the table or pile of books works just as well.

The Polaroid SX-70 has an exposure dial that allows you to brighten your image – simply turn the dial to the right to lighten things, or to add some darkness turn to the left. You can manually focus the camera, and create a shallow depth of field, meaning that the object in the foreground will be beautifully in focus, while the background is delightfully blurry.”

Below are some images of us testing out the Sonar SX-70!

If you have already noticed, the Sonar SX-70 has a peculiar attachment above the lens, differentiating it from the Original Model. This attachment is known as the Sonar; it is able to detect and auto-focus based on sound waves!

According to an expert from the Internet:

“When the shutter button is pressed halfway, a series of ultrasonic chirps is emitted from an electrostatic transducer located under a plate over the lens. These chirps travel to the subject and bounce back to the camera’s receiver, alerting the camera to the subject’s distance, and the lens is turned on a motor to focus accordingly.”

The tripod becomes a useful apparatus, particularly for the Sonar SX-70; we will explain our reasons later!

The following photos were our first few Polaroids taken with the Sonar SX-70. With initial limited knowledge of the camera or its appropriate working conditions, the outcomes were somewhat unexpected but we were nevertheless enthusiastic!

This next batch of photos were taken on another day with different conditions; having learnt from our initial experience, we were keen to try out the Sonar SX-70 once again!

We also noticed that there were streaks of light at the bottom of each Polaroid… We love it! Although it may be due to the chemicals of the Impossible films we were using, this exemplifies the raw and unique taste to the Polaroid! The Sonar SX-70 is truly impressive for its time 🙂

Before we proceed on with the accessories, we would like to point out that the films we have used for the Sonar SX-70 are made by the Impossible Project!

Previously, Polaroid used to make their own film known as the Time-Zero Supercolour (quite a fancy name for a film).

As you can see, we bought the SX-70 films. Because Impossible Project Film is very sensitive to light, we have to reduce our exposure setting every time we take a photo. We later found out with a Neutral Density (ND) filter, we are able to use the 600 films – which is better and slightly less expensive! We have yet to test those out …. but first, let us move on to the accessories we used!

Our first accessory we decided to buy is the Flash Bar by Impossible and MiNT, as the Sonar SX-70 is not able to take clear shots indoors because of low lighting. It is not necessary, but we decided to get one because proper lighting is important to us!

The Flash Bar comes with the following items:

Here are some Polaroids we have taken with the Flash Bar! We have not yet explored the coloured filters; however the film pack we used have black frame, as created by Impossible Project! 🙂

We love how our Polaroids turned out when using the Flash Bar. Our images became a lot clearer and more focused and we can conveniently take indoor photos! Unfortunately, we can only hope to control the aperture (despite the Sonar SX-70 having manual focus) so that we can take indoor Polaroids with natural ‘indoor’ lighting 😦

We have yet to try the colour filters with the flash bar. Stay tuned and we will keep you posted about how those images turns out!

The word ‘Frog Tongue’ in association with a camera may sound fairly odd. Initially, we thought so too; however this accessory definitely fits its purpose and its name!

After further research and experience with taking photos with our Sonar SX-70, we decided to invest on a SX-70 Frog Tongue by Impossible Project. The purpose of a Frog Tongue is to ‘shield’ the Polaroid when it is being ejected from the Sonar SX-70. This is particularly important, so as to shield the Polaroid from natural sunlight, as well as to preserve the quality of the image taken!

As pictured below, we initially struggled with installing the Frog Tongue onto our device. We had no idea where the Polaroid ejected, nor did we want to be too rough with our beloved camera! Nevertheless, after reading the instructions and watching many Youtube videos, we figured out and… tadah:

Polaroids with Frog Tongue (without the Flash Bar):

Here are some Polaroids we have taken with the Frog Tongue! We used the Impossible Project Second Factory Colour Film with Coloured Frames for SX-70 cameras, and we LOVE how our Polaroids have turned out (despite them belong technically ‘rejected films’)!

To reiterate, these photos are taken with Second Factory films! And yet, there are no harsh blue lines/exposures along the side of the Polaroids. The Frog Tongue is truly a good investment – it really upholds the quality of the photos and prevents the Polaroid from being overexposed!

We hope that this entry will give you a taste of what the Sonar SX-70 does, and why we love it! Although most of our comparisons are based on numerous variables – i.e, different conditions, different films, different development process, different times of the day – to test out the products, we felt that this was a quick way to decide and decipher whether these camera tools and accessories helped to produce images that we expected! Of course, there are unexpected aspects of the film development that may nevertheless brings a unique twist to the Polaroid!

There are so many accessories that have been developed for the SX-70, like the Mint Lens Kit (which we bought), the ND Filter (in its different variations), and so on. We have not reviewed them in this entry as we are still in the process of exploring these tools and accessories! We also hope that more vendors will bring in Impossible Project Films to Singapore!

Do check out our Instagram for more uploads of our Polaroids and instant films! We had a lot of fun connecting and learning from other Instagram users, who are also using the Sonar SX-70! Through further learning experiences and exposure, we also hope to find ways to overcome the humidity in Singapore, as well as adapting to the external conditions to achieve the best Polaroid!

NOTE: We will be updating our “Cameras We Use” page this week… So keep a look out for it! 🙂